Forget a situation like Agde Camp ,where the naturism has been overcome by sex affairs. Arriving in the Gargano you will find a different story . Here, the Naturism is practised with an extreme sense of civility and contact with the surrounding nature.

In Italy it’s an ever- growing phenomenon. A research effectuated by the Alviero Martini  Observatory shows that, on a sample of 550 Italian people(men and women), between 25 and 55 years old,   the 37 % of them had a naturist holiday at least once in their life; whereas in Italy the naturists are the 23 %. The 43 % of them leaves with their partner, but the 23%  feels inclined  to do it by himself. The 20% of Italian people dreams about a free holiday, even if it has never been experienced. 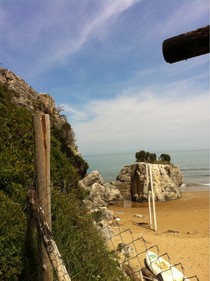 First of all: what ‘s the naturism? Starting from the assumption that I never practised the nudism(never say die!), but I share and respect the philosophy. The official definition of Naturism is: “a way of living in harmony  with nature characterized by the practice of communal nudity, with the intention of encouraging self-respect, respect for others and for the environment(Agde-Francia 1974)”. Even the sentence contains a sweet-sounding summary of the naturism essence. Loving the nature, self- respect and respect for others, for animals, and for the environment. By an healthy living, no smoking, no doping, respecting the ideas so far from us, until they remove our freedom.

An other important element that cannot be omitted is the relationship  with the world around us, completely naked. There are certain realities,( an excessive example, in my opinion), like CAP Agde where you can also do shopping without clothes  and, passing the 24 hours completely naked.

We are clearly speaking about one of the most famous place in Europe which practices the naturism. Even if, as I said before, there ‘s nothing more about the naturist philosophy.

In the Gargano, you will find a different story: people who practices naturism and come here above all to do this kind of tourism, share and respect the 100% of the naturist philosophy. 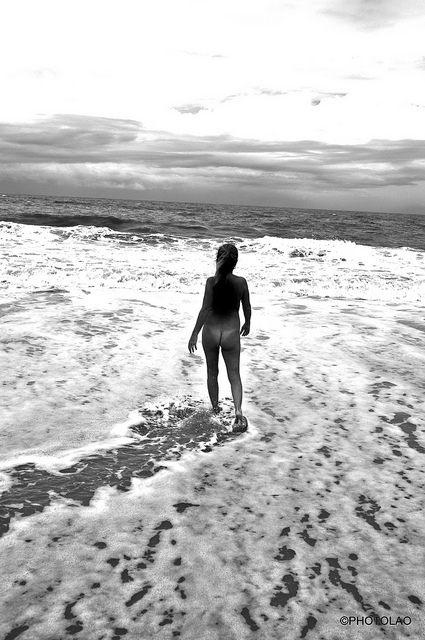 The first tourists that I met arrive here during  the very low season, in April or in the middle of May, to practice Naturism. I’ m sad to say so because this is aN undervalued trade, just because It is different and so, opposed to the local attitude. I ‘ ll give you an example: the first “swallows”(I mean tourists) which arrive here in that period are easily recognizable, and anyone knows that they are Naturists.

People see them like aliens and obviously every discourse about is closely related to the sex, etc. Clearly  the emancipation join us at the end, so it could happens but not always. In the Gargano there are two tourist structures for Naturists: both are situated in a fantastic context and in some places where you are totally clodes by the nature. These structures provide a good service and produce incoming  during even 6 months. Two many structures provide also affiliated swimming pools which are surrounded by the wonderful vegetation of the Gargano.

A greater target comes from Netherlands, Germany and  Switzerland. You can find also Italian people which are not really worried about economic crisis. They don’t fear the recession, in effect, the  number of Italian tourists is increasing every year. If it should be supported, it  could represent an important resource of growing . Vignanotica, a famous beach , in 2004 was directed to the Naturism. In that case, Vieste was farsighted and it was very important and useful to the development of that target.

Nudist beach in Siponto, next to the aeronautical establishment,up to the Candeloro River.

Once you will be between Torre Mileto and Capojale , turn to the crumbling structure next to the sea, follow the dirt patch, when you will arrive to the fence, turn left and try to go by car or on foot to the Norman tower situated to the bottom.

You can use also the road for Mileto-Capojale to reaching the naturist beach. You can park and after go into the Mediterranean scrub, where there is the Norman Tower( it is open to all but difficult to access).

The beach is situated to Vico del Gargano, between Rodi and Peschici. You can enter from the 89 state highway, reaching the Calenella Bay( climbing over the San Menaio Bay) or by San Menaio beach, following the beach on foot,  “Alle murgiette”is the name used for these three little bays without name.

The Vignanotica Bay is a pebble beach, with its various caves carved out by sea erosion in the high coast. It distances 13 km from Mattinata, near Vieste.

You can reach it following path bordered by  Aleppo pine trees and Mediterranean scrub.One time this beach was accessible only by the sea.

This place is also known as the Seagulls Bay, because of the remarkable number of seagulls.

ing the past it was one of the most popular beach for Naturists. Today it is always considered as a nudist beach, but only during the low season: naturism is practised in the right and the left ends of the bay.